The Watford Speakers September / October Speechcraft programme dates have been announced. Learn the basics of public speaking techniques and presentations within a small and supportive group.

For the first time ever, District 91’s annual conference will be in historic Southampton from 5-7 May 2017. The theme is “Mayflower – discovering new worlds”.

Early bird tickets are available until 28 February 2017. The event will take place at:

Southampton’s iconic hotel in the heart of the city

Find out more or register to attend the conference. 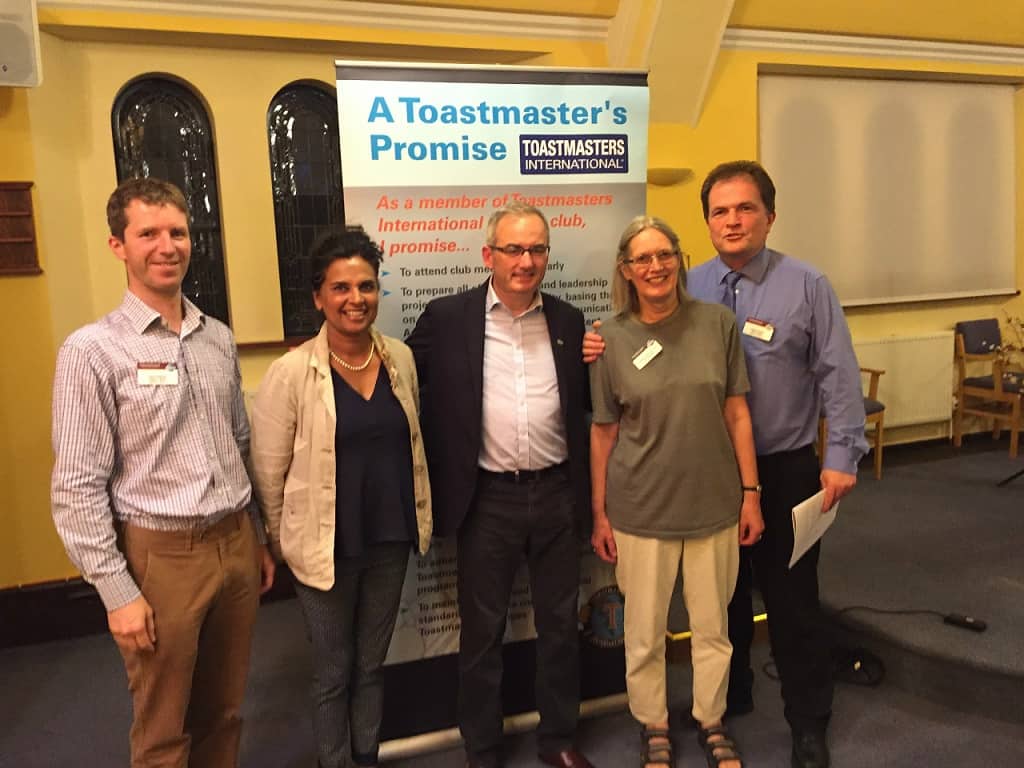 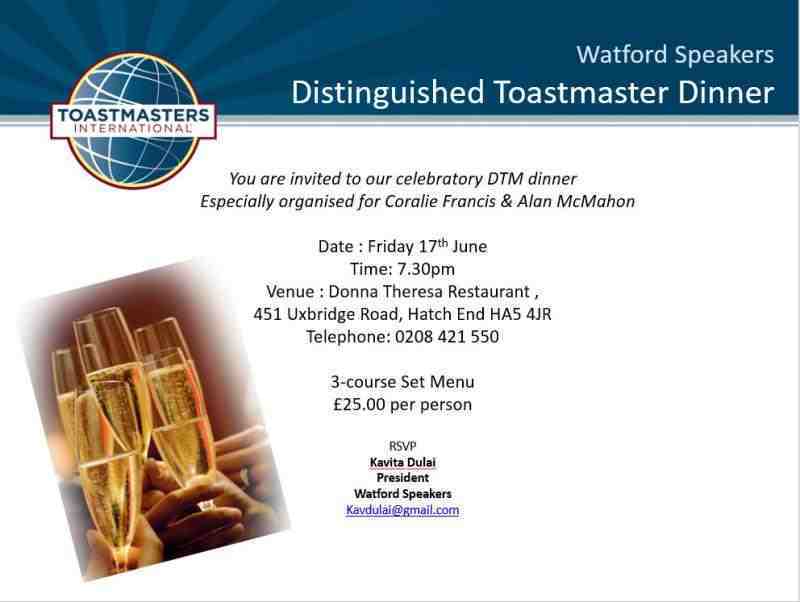 We are pleased to announce that 2 of our members have made it to the level of Distinguished Toastmaster (DTM)! It’s very much deserved, and an unimaginable amount of work has certainly gone into them both making it to this level.

To honour this occasion, we will be holding a dinner to celebrate, at Donna Theresa Restaurant in Pinner (HA5 4JR). 3 courses will be included for the price of £25.

Interested in attending? All are welcome, simply RSVP to our club president, Kavita Dulai, at Kavdulai@gmail.com .

View the full event details here, and add it to your calendar: Link 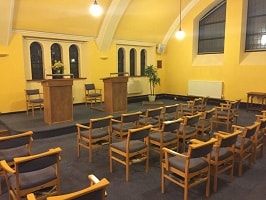 Our usual Tuesday meeting was hosted by Pamela Attfield who took the role of Toastmaster. she was supported by Murali (Ah Counter), Piotr (Grammarian) and Caitriona (Timekeeper).

After a Table Topics session led by Coralie Frances, we moved to prepared speeches.

Mopani, with his speech ‘Principles of Flight’, helped us to overcome our fears of flying. He was followed by two Icebreaker speeches delivered by Naomi with “Adventures of a Simple Life” and Jibran with “Welcome to the UK”.

This was a special evening for our club, as we ran an open evaluation of the Table Topics session, meaning everyone was able to participate.

After speech evaluations, Donovan presented his appraisal of the meeting. 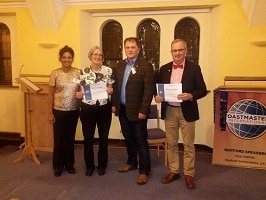 September 15, 2015October 25, 2017
On 15th September 2015 we had our club level Humorous Speaking and Table Topics Contest.
This evening was hosted with great delight and charm by Rosemary Calder, who took the role of Contest Chair. 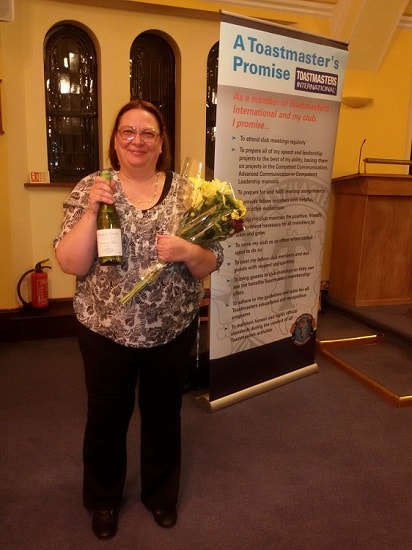 We started with the Humorous Speaking Contest.
Contest participants were expected to prepare a speech to entertain the audience. The standard of speaking was exceptional. 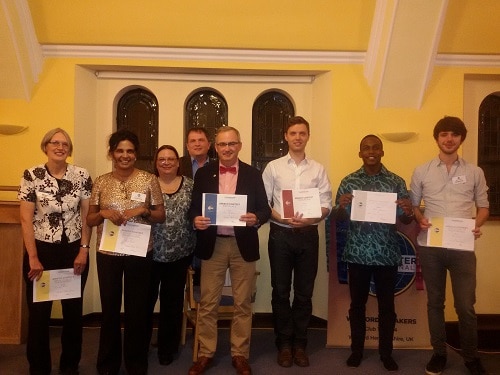 As we reached the second half of the evening, we moved onto the Table Topics contest. Here, each contestant had only the time it took from hearing the title at the door, to walking onto the stage, to prepare a speech to deliver. 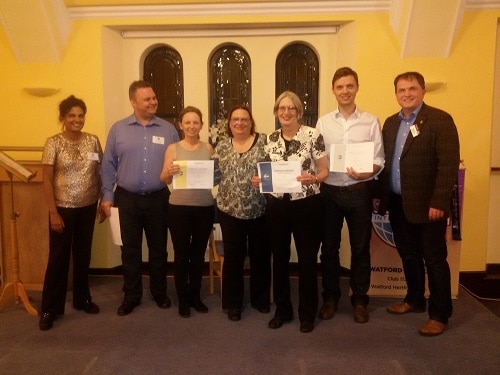 After long deliberation, the contest judges delivered the following results:

Today we say farewell to Sandra, one of our most experienced and well established speakers and mentors.

A few words from Sandra…

Thank you so much for the lovely send-off you gave me on Tuesday. I still have a big lump in my throat and a glow in my heart from all the gracious things that were said and all the memories you stirred up for me. I honestly had no idea you were going to do all that for me – and I will treasure that gorgeous Outstanding Member pin for ever. I had never even seen one before – let alone owned one! It means a great deal.

I was touched that so many busy people came to the meeting and the meal – particularly those we do not often see who are inextricably embedded in the history and progress of the club.

I am immensely proud of what we have achieved at Watford Speakers and the way our work there has benefited so many people. I have made so many friends and learned a great deal in the process, as we strove to rise from our humble beginnings to where the club is now.

My time in TM has not been without its challenges but on Tuesday, all those difficulties melted away and you made me feel so special and so happy. You gave me a wonderful memory to hold onto for a very long time.

I am sad to leave the club but I know it is in good hands and on solid foundations and it is time for me to move on to the new challenge of being Chief Ambassador for the REP. I look forward to keeping in touch and learning of the club’s progress and continued success. I am sure you know that if you feel I can even help in any way, I am just at the end of a phone or an email. I will hold you all to the promise to invite me to the Christmas event and I am already looking forward to it.

Please pass on my thanks to the rest of the officers and the club members not just for the lovely event on Tuesday but also for everything that has happened at the club since those tricky days in 2008 with the local youth throwing bricks at our windows!! The club has come a long way and so have I.